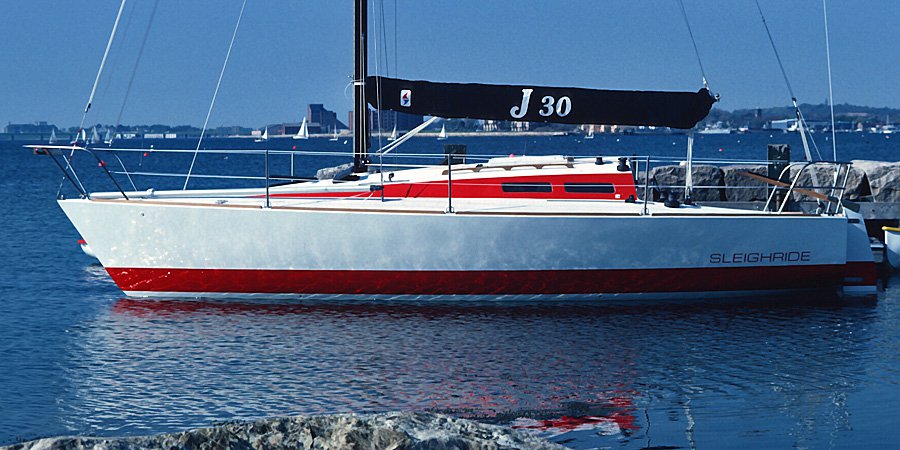 "Anyone who’s had even the briefest exposure to sailboat racing has heard of J/Boats. Ask a racer to list the hottest production racers active today, and they’re sure to Include J/24s and J/35s. Begun in 1977, J/Boats Incorporated, has defied the yacht sales slump with an ever-changing line that threatens to run out of numbers - 18 models through 1991, ranging from 22 to 44 feet.

For 1992, they’ve come out with a J/105 and J/92 (metric measurements equal to 34.5 and 30 feet respectively, opening the door to the European market), both of which have been pushed aggressively as fast, family oriented and very simple to sail. In addition, the J/130, a 42-footer, will debut in October, and a J/60 (feet) is in the advanced planning stage. Is there a length they’ve missed?

The story of two J/30’s caught in the middle of yachting’s worst disaster as reported by phone to Bob Johnstone.

"J/30 hull number 10 was shipped to Westerly Marine to serve as a model as they began production in the U.K.. She was named JUGGERNAUT and entered in the Fastnet Race skippered by Andy Cassel and crewed by Tim Levett, project manager from Westerly.

J/30 number 29 was purchased by Bill Wallace from Houston, Texas. She was commissioned in Rhode Island, sailed single handed from Bermuda across to England where she was caught entering the channel during the storm. Bill plans to enter the OSTAR singlehanded trans-Atlantic race next June.

Fitting Out for Extended J/30 Cruising

Years ago in a Chicago bar over our last call drinks, my friend suggested we spend the following cold season sailing the Caribbean. Hoots of bitter derision naturally followed, and then quiet. Was it possible? Well, yes ... all we needed was a boat.

I don’t have to tell you she was a J/30. Most people down the Ditch who heard our float plan took one look at the boat and said - you guys are crazy. Well, sure. Connecticut to the Yucatan to the Virgin Islands and up 6,000 miles the wrong way around. Now my tan’s slowly being replaced with freckles of Blue Streak, and the guys at the yard have a kinder view of my sanity. And a pretty solid respect for the strength of J-boats.

READ MORE OF FITTING OUT FOR EXTENDED CRUISING HERE