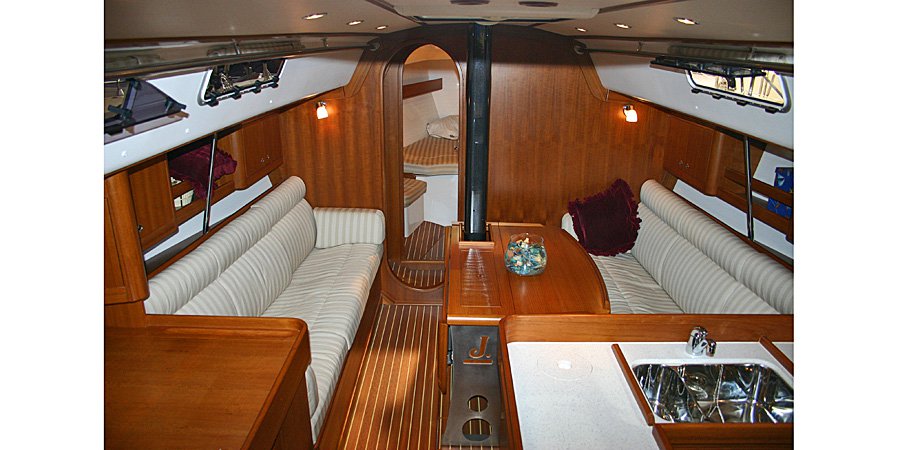 The J/133 is one of the best mid-40s racer-cruisers on the market.  Fast, diverse, easily handled by full race crew or short-handed by a couple.  Below are different perspectives from professional boat reviewers on what makes the J/133 an excellent sailboat and an excellent investment for you and your family as a cruising sailboat, racing sailboat, or extraordinary weekend day-sailer!

The new 43-footer from J/Boats is quite simply a breeze to sail. We tested the J/133 in 15 knots of wind with six people on board and were able to handle it with ease. From sailing upwind, fully hiked, to pulling off a bunch of jibes in a row, we never missed a beat.

The first thing that pops out when stepping aboard the J/133 is the deck layout. You expect a 43-footer to have lines running all over, but the 133 has has the simplest of plans; the two halyard winches are forward, just aft of the mast, and their placement makes a ton of sense. No lines for the crew to trip on when crossing the cabin house from side to side, a nice feature. There’s plenty of room to walk around the shrouds while heading to the bow for takedowns, jibes or anchoring.

Quite frankly this yacht has got success written all over it and with a carbon mast and rudder as standard it is very competitively priced.

This performance cruiser has been extremely well thought out and not surprisingly fifteen have already been sold in Europe, nine of which will be racing in UK waters this coming season.

After its early success in the States winning class at the 2004 Key West Race week, the J133 has already been in the chocolates in the UK and Ireland with Class wins at Cork week (WOW!) and the Tyco Hamble Winter series (JUMP).

The J/133 achieves the magic combination of terrific sailing qualities with accommodations a cruising family will love.

Jim Johnstone cut off in mid-anecdote about his years crewing on the classic J Class Shamrock IV. “Simon, ease the main! Ease! Ease! Ease!” he said with an urgency that only comes when racing or something bad is going to happen.

The stern of the new J/133 lifted on the crest of an eight-foot wave, and we took off. I put the handle in the self-tailing mainsheet winch and cranked the sheet in as fast as I could.

“Simon, look at the speed.” It went past 10.5, then to 12 knots, and kept going until it hit 14.5 and stayed there for 30 seconds before the wave we were surfing finally passed us. We were close reaching under a single-reefed main in 25 to 30 knots of breeze as we entered The Race at the eastern end of Long Island Sound.

In setting the pace for the current crop of racer/cruisers, the J/133 assigns a high priority to speed.

By the time the spray had settled in the wake of the 2004 Boat of the Year contest, it was clear to me that among the growing fleet of sailboats being offered for the dual purposes of racing and cruising, the J/133 was definitely the showstopper. Even though I spend much more time cruising than racing, I like boats that are meant to sail efficiently, and I found in the J/133, a big sister to the popular J/105, technology and simplicity elegantly blended in pursuit of harnessing a breeze.

The J/133 is light and responsive. It has a fine entry, a flat canoe body, and modest beam that trims down to an even leaner waterplane. The well-matched bulb keel and spade rudder deliver forgiving steering characteristics as well as surprising tracking ability for appendages with such high-aspect ratios. Even as we noticed some binding in the rudderstock bearing on the prototype boat, the J/Boat team was already in the process of fixing the problem.